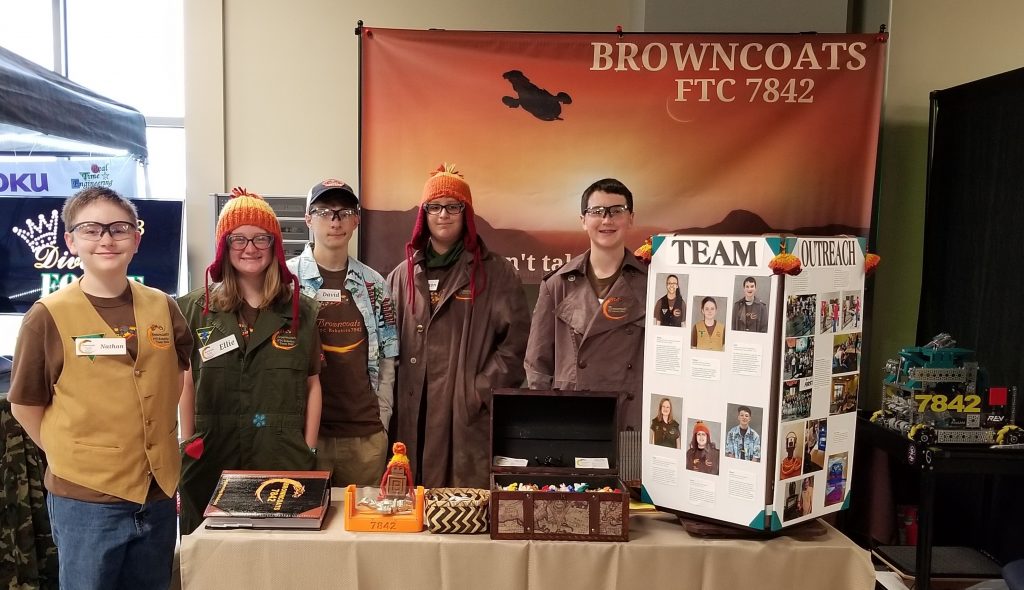 The Browncoats are a community FIRST Tech Challenge robotics team from the Huntsville, Alabama area. Currently, the team is made up of ten students – ranging from 6th to 12th grade. Between them, these students represent public, private, and home schools from across the North Alabama area. Our name comes from our favorite TV series, Firefly! Stay Shiny!

Our team is incredibly excited to be competing in the 2021-2022 FIRST Tech Challenge Freight Frenzy Season. As of this moment, we have not yet competed in any competitions, but we are looking forward to doing so! Be sure to follow our progress on Facebook, Twitter, Instagram, and YouTube for regular season updates.

We competed in our final competition of Ultimate Goal on May 24th in Springdale, Arkansas.

Throughout the 2020-2021 season, we competed in five virtual scrimmages, one virtual state competition, and one in-person state competition. Most of our team members were new this season, and it was such an incredible learning experience for us!

Alabama Scrimmage One: Our first virtual scrimmage was held in early March. We recorded six matches and uploaded our scores, but since it was the first scrimmage and was mostly used for teams to test the scoring software, rankings were not announced. We achieved our 100 point goal that we set for ourselves, and we learned a lot about our robot!

Arkansas Scrimmage One: In mid-March, we competed in our second virtual scrimmage, which was hosted by FTC in Arkansas. Our team competed in 6 matches, achieved a new high score, and finished in fourth place overall! This scrimmage provided some new information about our robot, and it was a fantastic learning experience.

Alabama Scrimmage Two: Our second virtual scrimmage, which was hosted by FTC in Alabama was completed very soon after our first Arkansas scrimmage. During this competition, we finished in 3rd place and achieved a new high score. This competition was just as informative as the other two, and we’re so thankful we had the opportunity to compete.

Alabama Scrimmage Three: We decided to not to participate in the second Arkansas scrimmage so that we could make tweaks to our design and improve our consistency for the third Alabama scrimmage, which was held in early April. We finished in fourth place, and as we hoped, our scores became much more consistent. We focused on strategizing before each match, which helped our overall performance.

Arkansas Scrimmage Three: The final scrimmage of the season was hosted by FTC in Arkansas and held in mid-April. We came in fourth place, and our scores continued to improve. This competition was a great opportunity to prepare and practice for the upcoming Alabama and Arkansas State Championships. All of the scrimmages were incredibly beneficial to our team, and we’re so grateful we were able to compete in them!

Alabama State Championship: On May 9th, we competed in the virtual Alabama State Championship, which included six matches for each team and remote judging. Our team recorded some steady and consistent scores and finished the day in fourth place with a new high score. We’re honored to have received the Innovate Award, along with nominations for the Inspire and Design awards.

Arkansas State Championship: Our final competition of the season was held on May 24th in Springdale, Arkansas, our only in-person competition of the season. During the day, we won three of our six matches, and achieved a new high score with our alliance partner in one of our qualification matches. We finished the day in 9th place, and we received the Innovate Award. Competing with other teams for the first time in over a year was a wonderful experience and an incredible learning opportunity! 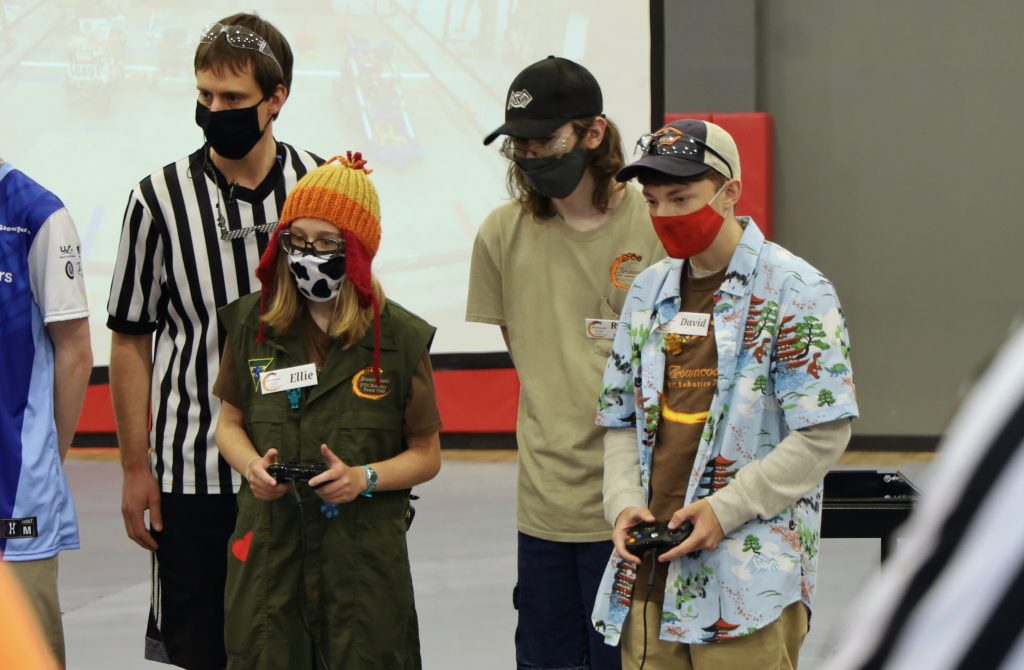 If you would like to keep track of our team’s competitions and results, visit our Orange Alliance page: https://theorangealliance.org/teams/7842

After each competition, the results will generally be posted soon after. You can also follow all of our social media, where we post about our journey!

Team FTC 7842 Browncoats’ mission is to spread awareness and recognition of FIRST robotics and STEM throughout our community, while also teaching students important life skills such as team work, communication, cooperation, experimentation, public speaking, building, programming, technical writing, marketing, fundraising, and more. Not only do we plan to introduce FIRST to as many people as we can, but we also plan to get them involved with the program through our efforts.

Because there are so few competitions in Alabama, it is our goal to create more opportunities for teams to compete. Throughout the year, we plan to host many scrimmages and workshops, along with our annual Rocket City Invitational!

If you would like to apply to join our team, please fill out this application: https://www.surveymonkey.com/r/MK6BYWB  Once you’ve done that, someone from our team will contact you to come join us at one of our meetings to meet the team! 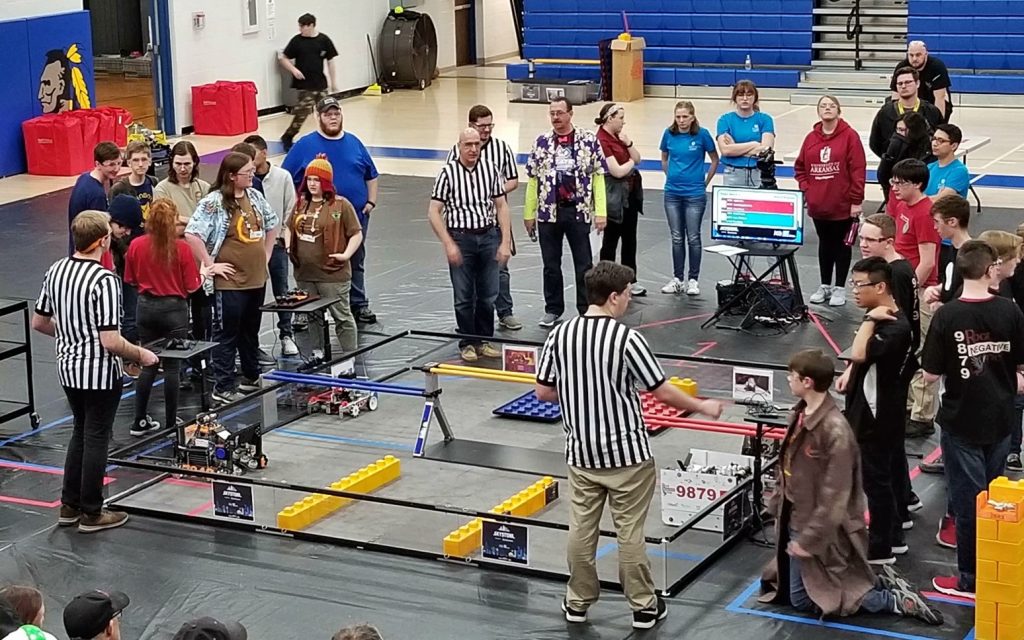